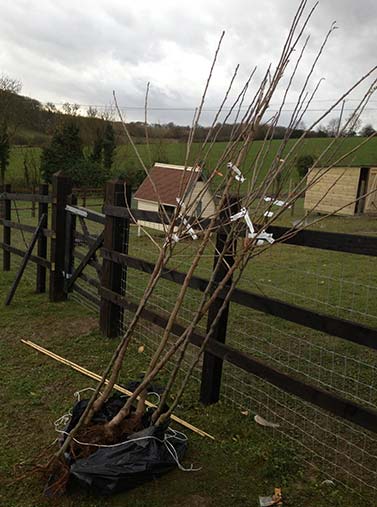 The fruit orchard is my most recent adventure in the garden, although planting it was a rather muddy job thanks to the very wet winter we have had.

A quarter of an acre was fenced off with post and rail fencing in the autumn. This serves a dual purpose, it will be a run for our chickens, ducks and geese, who can’t always free range in the garden because they scratch up the soil or mulch and eat our tender plants but on grass in the fruit orchard, providing the chickens cannot scratch at the roots of the trees and the geese cannot nibble the bark of the young trees, they can help to produce our own source of organic manure that is high in nitrogen, and contains phosphates, sulphur, magnesium and lime.

Chicken manure has four times as much nitrogen and three times as much potash and phosphorous as farm yard manure so for me, this is as good a reason to keep them as for their eggs.

A selection of apple trees were bought to provide apples for eating, cooking and juicing. A cider apple tree was also chosen for a future home brewing project of mine. The second part of the fruit orchard comprises cherry trees. We already had two productive pear trees grown against a fence that borders our neighbours garden.

Fruit trees should be planted during the winter when the trees are dormant. It’s quite a shock to a tree to be uprooted and replanted so it’s important to have the ground well-prepared before trees arrive.

Branches and roots that have been damaged in digging up and transporting the trees should be pruned back past the break.

A stake was driven into the centre of the prepared area and some chicken netting was used to make a large circle to stop the chickens from scratching it all out again and the geese from nibbling the branches of the trees.

I used Rootgrow which is made from naturally occurring mycorrhizal fungi (organisms that co-exist naturally with the roots of trees) and applied this as a gel directly to the roots before planting them to give them a good start.

After part planting the roots in the ground, a light topping of organic bonemeal was applied and topped off with more soil. The level of soil should match the ‘tide mark’ where the tree was previously planted. The graft (all fruit trees are grafted onto rootstock these days) should be well above the soil level.

The orchard serves an aesthetic as well as a productive purpose and I’m rather excited about seeing our new trees blossom in the spring.

All of our trees survived except for one which we had to re-plant. As you will see from the photos below, we have had our first apples.

Planting Early Potatoes in the Greenhouse