We don’t tend to give much thought to what’s under our feet, but when you’re talking about vegetable gardening, then it really does all come down to the soil. What type of soil you have depends mainly on your geographical location, as most soils are made from minerals that have been weathered away from the underlying rock. It’s difficult to change soil on a large scale, so for most gardeners the best choice is simply to learn how to get the best from the soil that they have.

The texture of your soil depends on the different proportions of mineral particles it contains. The largest particles are sand, which are mostly made from quartz, and they make soil feel gritty. They are non-porous, and whether or not a sandy soil holds much water depends on the size of the sand particles – the larger they are, the more free-draining the soil will be. 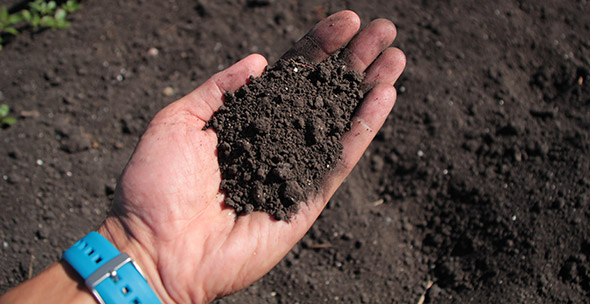 Silt particles are smaller and hold on to more water, but they don’t have the ability to form stable clumps of soil. Some silt particles behave very much like sand, but some are less inactive, and behave more like clay particles.

Clay particles are smaller still, and are made from a variety of different minerals, which means that some clay particles have surface electrical charges. Many of these charges are negative, and can attract the positively-charged ions that make up many of the plant nutrients in the soil. This means that clay soil holds on to plant nutrients better – they are less likely to leach out of these heavier soils when it rains. Clay soils are also very good at holding on to water. A little too good, in fact, as they can hold on to some water so strongly that it becomes unavailable to plants.

Most soils are a mixture of the three types of particle, but one type can predominate. You can check what type of soil you have by digging up a small sample to see how it feels in your hand. A gritty feel means that you have a sandy soil, whereas a more silty soil feels silky. If you can roll your soil sample into a ball, or a sausage, then you’ve got a high proportion of clay. Loam is an ideal soil, with the right proportions of all three particle types to make it perfect for gardening – but it’s rare to find it in your garden!

Each different soil type has advantages and disadvantages. Sandy soils heat up quickly in spring, and won’t give you problems with water-logging in winter, but plants need more watering in hot weather, and more feeding generally. Silty soils can be hard to manage, but take longer to dry out. You may find that clay soil becomes waterlogged in winter, and takes a long time to warm up in spring, but it holds more nutrients for your plants and needs less watering in summer. (In some places the predominant soil is not mineral-based at all, but is peat – a soil that is almost entirely composed from organic matter. It has good water-holding properties, but usually lacks nutrients.)

Whichever type of mineral soil you have, the best way to improve it for gardening remains the same. Adding organic matter (compost, manure, etc.) has an almost magical effect. On sandy soils it helps retain water, whilst it helps to make clay soils more free-draining. In all cases it feeds the micro-organisms that live in the soil, and they make nutrients available to plants and can also make huge improvements to your soil structure – another important aspect of soil.

The basic structure of soil is that it has a top layer, the topsoil, in which most of the micro-organisms live, and in which the majority of plant roots are to be found. It’s here that plants look for nutrients and water, although plants with deep roots can dig further down. The depth of your topsoil depends on the local geology and the history of your garden. You could only have an inch or so, or more than a foot. If you’re digging your soil, this is where you want to incorporate organic matter. Be careful that you don’t mix up the soil layers, as underneath the topsoil conditions are very different.

The subsoil layer has less air, which makes it uninviting to micro-organisms and plant roots. Deep-rooted plants can send roots into the subsoil to bring up minerals, and water. Again, the depth of your subsoil depends on your local geology; underneath the subsoil is the parent rock.

A healthy soil holds the air, water and nutrients that support life, but the things we do to our soils can cause problems. A big issue is compaction, where soil is squashed down, and this not only makes it very hard for plant roots to grow into, but compacted soil holds far less air. If you have a lawn then you may already be familiar with relieving compaction, which in that case results from walking on the grass. Bad compaction can only really be solved by digging, but if you’re not in a hurry you can keep off the soil, apply plenty of organic matter and let the worms and micro-organisms sort out the problem for you.

Soil isn’t left bare for long in nature, it soon gains a covering of weeds. And whilst you may not agree, for the soil itself, that’s a benefit. Bare soil is at the mercy of the weather, with nutrients washing away in the rain. The soil structure can also be damaged by heavy rain, leaving a solid layer (a cap) on top that seedlings can’t break through. In dry weather, topsoil is very susceptible to being blown away.

A traditional approach to soil management is digging to improve the structure, and to incorporate organic matter. Heavy clay soils are often left bare in winter, for frost to break up big clumps into a more manageable state. But you may prefer the No Dig option, which is particularly good when you’re gardening in beds and don’t need to step on the soil. Organic matter is left on the soil surface to protect it from the weather, and is gradually incorporated by soil organisms.

However you choose to manage your soil, remember that in an organic garden, it’s the healthy soil that gives rise to healthy plants.