Leaf Mould is a wonderfully crumbly brown mixture of compost that looks a little like peat but has far more goodness in it. Autumn leaves are worth their weight in gold to serious gardeners and head gardeners in days gone by would often refer to leaf mould as the “Magic Ingredient” to home made potting composts. On this page, I’m going to tell you how to make leaf mould compost yourself. 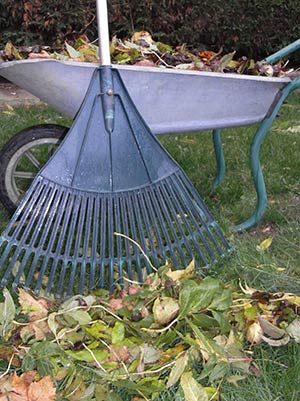 I leave the fallen leaves in our garden for most of October to accumulate and by mid November most of the trees are bare which is when I start a big clean up operation. Using a plastic leaf rake (or normal rake if you don’t have one, it simply takes a little longer), I gather leaves in buckets, wheel-barrows or bags before storing them in a leaf mould bin which is no more than a wire netting enclosure that allows them to rot down into precious leaf mould compost.

Some leaves take a little longer to compost than others, especially beech, sycamore, and chestnut but conifers and other ever-greens are by far the longest, taking up to 3 years to compost. Conifer clippings from hedges usually have a fair amount of wooden stem as well, so they would need to be shredded first. I don’t bother with these, it’s simply too much effort when there is no shortage of leaves blowing around the garden that can be turned into leaf mould by the following autumn. Conifer trimmings from my hedge cutting in September / October get to go onto the bonfire that gets lit on a weekend near November 5th which is a time when most people are a little more tolerant to having the smell of smoke about if the wind suddenly changes direction and sends a cloud of smoke to my neighbours.

How to Make Leaf Mould Compost

Normal garden compost is mostly decomposed by bacteria and needs a certain temperature to work, however leaf mould compost is decomposed by fungi which is quite happy to decompose through the cold winter months.

I have tried 3 different kinds of compost bins. The key is to have wet leaves and to tread them down as you go. There is no need to turn the heap, it will only disturb the process. If you don’t have many leaves, you can use bin liners, these are filled, the leaves are wet and then the bags tied and punctured with a sharp object to allow some ventilation. The second method I have tried is using a Tonne bag – the sort that sand and gravel is delivered in but far better if you have more than a few bags full is to make a leaf mould compost bin.

A leaf mould compost bin is no more than a simple square of netting that can hold the leaves you’ve gathered. Whilst you can knock 4 sturdy posts into the ground and stretch some chicken netting around these, you can also make the structure more temporary than this by using no more than sturdy bamboo canes weaved between the wire and pushed gently into the ground.

Secure the netting with staples but leave one end tacked on loosely so that you can easily remove the staples when you want to dig out your bin.

Once you have your leaf mould compost bin in position, fill it up with your leaves, making sure they are wet. This isn’t a problem most years when I’m usually sweeping up wet, half decaying leaves anyway but if we get a dry autumn, I add a watering can of water over every wheel barrow of leaves.

Leaves will rot down more quickly if they are cut up into small pieces. You can put them through a shredder, or easier still is to use a lawn mower on a moderately high setting to collect them. A small amount of grass clippings seems to help speed up the composting time but don’t have the mower on a setting that will cut too much grass, or you’ll destroy the composition of the final leaf mould compost and risk the compost heap turning into a wet, smelly black sludge over the winter months.